In exchange for our selection of English goodies we were sent away from Portugal with a selection of the region's finest sausages. These included some tasty Jewish alheira sausages, which like a lot of Portuguese food, were strongly flavoured but really nice (especially with olive oil and a little piri piri), and some blood sausages - which Dgym wasn't keen on but I quite liked.

The third type of sausage we took back with us was the "stomach full of ribs" - I don't know what its proper name is, but is exactly as it sounds - a pig's stomach stuffed with its ribs. In Portugal, as we observed and experienced on several occasions, they are not wasteful when it comes to pig-parts.

This is the sausage before boiling. It was dried out and quite hard. We'd had it since December, but these things keep for months. 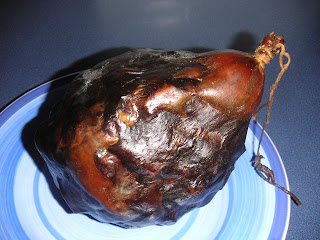 The first step was to wrap it in foil 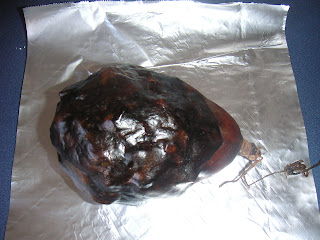 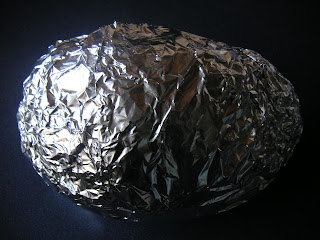 Boil in the foil for an hour and a half. They tend to cook with massive pans in Portugal, this was the biggest we had and it barely fit. 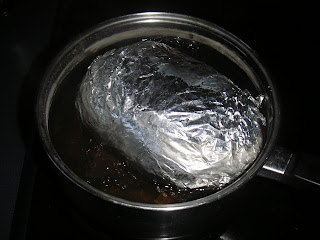 After an hour and a half of boiling, the sausage can be unwrapped. It has swollen up during cooking, and is now quite soft and squishy.
Another thing that happens during cooking is that it starts to stink. I mean really, really stink. I didn't really notice because I have a lousy sense of smell and I was working so close to it anyway, but Dgym started raising a few objections. 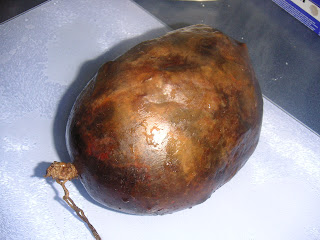 The stomach is just a container and doesn't actually get eaten - so now it's time to break it open to get at the ribs inside. 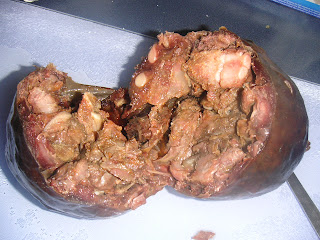 At this point, the ribs can be eaten - or they can be roasted for 20 minutes. I tried a few - they tasted OK, very strong as expected but not as gross as they look in the pictures. I then went with the roasting option and popped them in the oven. 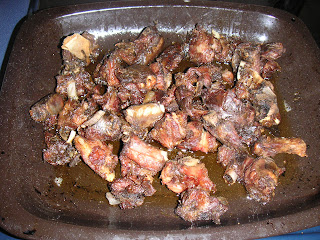 Served up with roast potatoes and green beans (You have to eat some fairly bland food with these sausages to balance out the super-strong flavours), I only managed a couple more of the ribs before my tastebuds gave up and decided they couldn't take any more. By this point Dgym had left the building to get some non-sausagey air, and I had completely lost my appetite and was beginning to realise just how much the place stunk of sausages.

We have been trying to get rid of the smell for the last 24 hours which involved disposing of every last trace of the offending sausage, opening lots of windows, burning scented candles and baking a chocolate cake in the kitchen.
Posted by Hel at 3:15 pm