We were quite sad to leave Ban Krut, we enjoyed a very relaxing week there but we were also excited to move on, see new places and eat street food again - while there were a few regular food carts around town selling dried squid, pancakes and grilled chicken, Ban Krut was very much a restaurant kind of place (albeit a delicious seafoody one).

We took another longish train journey to Surat Thani (which is where I ate bugs last time). Based on the awesomeness of the markets, Surat Thani would be worth a few days' stay, however it's a bit too big for us and the hotels are a little lacking - I struggled to find a hotel not reviewed as grim or noisy, and the one we did stay in was OK but sat on top of a karaoke bar which kept going until 1am! It's the kind of place where people stop over one night on their way to beachier destinations, so I suppose there's little incentive to run a hotel where people might want to stay longer.

We moved on swiftly next morning to Khanom, a town on the coast about 50 miles east of Surat. Perhaps some of the appeal was based Khanom being the Thai word for dessert, but it was described as a quiet fishing town with a couple of markets and nice beaches - sounds good to us!

Our bus arrived in the centre of town and headed straight for the seafront, which turned out to be a couple of kilometres' hot sweaty walk - it turns out Khanom is a pretty spread out kind of place! We stayed in the Golden Beach hotel, a slightly odd place with birds nesting in the corridors and a constant stream of horrible cheesy love songs playing in the reception and restaurant - we ate there the first night as it was quite a long walk to town but the music was so awful we avoided it after that.


We found a beautiful big  (and apparently seven-legged) orb weaver spider hanging off the phone wires - South East Asia has plenty of spiders although we have encountered very few of them and this is the biggest we've seen by far - her body was a couple of inches long. I tried to get Dgym to stand nice and close to give a proper sense of scale but he wasn't having any of it.


We also met quite a few football fans in this part of the country. Quite understandable - football's popular all over the world, but what we found curious was that they mostly seemed to be Manchester United supporters. Most people think of London when we say we're from the UK but here the default assumption was that we might be from Manchester! (Alternatively, the conversation goes "Where are you from?" "England" "Ahhh.... David Beckham!") We were a bit bewildered to meet so many Thai fans supporting an English team, but then again neither of us really "get" football.

And as if he hadn't had enough animal encounters this holiday, Dgym had his foot mauled by tiny puppies: 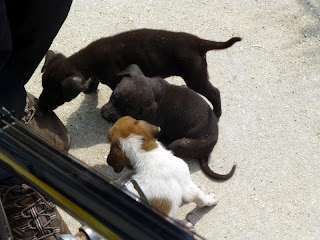 Khanom was a nice town with a good beach but not quite what we were looking for for our last week in Thailand, so we moved on after a couple of days. We were kindly offered a lift into town by another hotel visitor, a Man United fan of course, so we crammed into the back of his pick up truck - what with both of us carrying backpacks and the five kids and a bicycle already in the truck it was a bit of a squeeze so we perched on the end, tried not to crush any children and held tight for the couple of kilometres' ride, hoping there would be no sudden acceleration!

We weren't quite sure how to catch the bus back out of town but after a couple of minutes of standing by the side of the road looking confused, we were soon offered help by a motorbike taxi driver who kindly phoned the minibus people so they knew to pick us up.