We previously spent a week in Prachuap before went to Vietnam - seeing as we were headed back that way and it was so lovely the first time round, we couldn't resist stopping in for another few days. Unfortunately we had hit the start of the long weekend for Makha Bucha day, a Buddhist festival. Being a nice bit of coast a few hours' drive from Bangkok, long weekends transform this area from a sleepy seaside town into party central and all the hotels fill up.

After a long hot sweaty walk around town we had no room, and realised we probably should have pre-booked. I sat on the sea wall to use the wifi of a hotel we'd previously stayed in and search some booking sites, while Dgym headed to the bike shop to try and rent a scooter to look further afield. 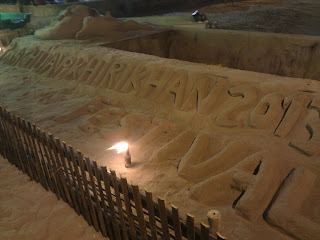 It turned out the bike shop owner had a contact with a spare room in a cheap guesthouse near the station so we reconvened and were tuktuked over there. The guesthouse turned out to be a small cottage with kitchen and living areas, owned by a German-Thai couple who had lived in Germany for 40 years and then moved back - neither spoke much English so we found ourselves thoroughly confused by trying to recall scraps of German while also trying to use and expand our Thai vocabulary.

Still, we enjoyed spending another three days in Prachuap - despite being kept up at night by trains, dogs and on the last morning woken by some kind of heavy duty blender being operated on the other side of the wall from our heads at 8am! The pier and temples were all lit up, the seafront was full of people and there were sand sculptures and a fire spinner on the beach. There was also an interesting looking market on the seafront but it turned out to be mostly wooden furniture and plants, neither of which we are looking to take home as souvenirs.

We spent most of our time in the Ao Manao area, which is where Dgym was bitten last time we stayed. We revisited the monkey area (with Dgym keeping a healthy distance from the offending furballs) and "walked" up Khao Lommuak, a 275m high hill on the headland between the Prachuap and Manao bays.

There is a reason for the quote marks around the word walked. The path up the hill started out as steps. They were quite steep and we found ourselves quite hot and sweaty after no time at all. The steps stopped about two thirds of the way up and the route continued as a roped rocky path. No worries,we were wearing reasonable shoes and can handle a bit of rough terrain! 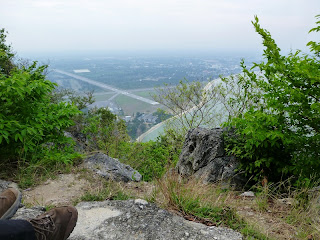 It got steeper and more technical as the "path" continued up. The rope was strong and well secured but there came a point when we realised that we were going up pretty much vertically and in any sane situation we'd be double roped and wearing helmets, climbing shoes and harnesses. That and other things like we probably should have set out with more water and also it was going to be even more interesting getting back down. Fortunately we both did a few sessions of indoor climbing a few years ago so obviously knew exactly what we were doing.

Well, we made it to the top. There was a little pagoda and some smashing views over the local bays. There were some little oranges on the pagoda which would have made an ideal hilltop snack, but they'd been offered up to the Buddha and it probably would have been bad karma to eat them.

We made it back down again, with some abseiling and careful use of footholds - Dgym's legs were trembling by the time we reached the bottom, at almost exactly the same spot where he'd fainted a couple of weeks previously! Can't take him anywhere... well, at least not there apparently.

Apart from that, our two beach days were pretty relaxing. Ao Manao is really a very lovely beach - the water is warm, the waves are gentle and it is owned and controlled by the Air Force, meaning it's kept nice and clean and also is unlikely to get overdeveloped. The northern end has pretty little pink seashells and tiny digging crabs:


At the southern end there are plenty of deckchairs, umbrellas and little restaurants serving delicious seafood.

The Air Force run some kind of activity sessions for teenagers at weekends which seem very popular - we saw hundreds of kids running back and forth along the beach and playing silly games like bottom shuffling races down to the sea, everybody lying end to end, and getting spun around several times then seeing if you can still run in a straight line.

Ao Manao is a couple of miles out of Prachuap. We really enjoyed the town itself which has some lovely sunrises and sunsets:


It also has two populations of monkeys - the nice monkeys, one of which bit Dgym, and the mean monkeys, who didn't actually do anything wrong.


Prachuap also has morning and evening markets, some great restaurants, bicycle rental and some pretty cheap hotels. It is very popular with Thais on long weekends and otherwise has a low level of non-Thai tourism A lot of the restaurants have a translated menu and there's even a couple of pizza places but most visitors seemed to be there to have a quiet time and appreciate the place for what it is. We'd definitely recommend it if you want to go somewhere genuinely Thai, eat nice Thai food and relax for a while!

We first heard about Prachuap just before we left the UK, my dad sent me a Guardian article about Thai beach hotels - so thanks Dad!
Posted by Hel at 2:48 pm