I wanted to bring the bicycles but there was no persuading Dgym to get his fancy trike out of the shed, even with the prospect of cheap tasty noodles to fuel us and plentiful massages at the end of the day. So we've swapped panniers for backpacks and are wearing down our feet instead of our tyres this time.

The flight to Thailand was pleasant, we had a lovely dinner and plenty of legroom. The dinner menu kept us amused for a while - unusually, we were less interested in the food and more concerned with deciphering Thai lettering and deducing what the word 'chicken' looked like. We had a decent sized list of food words by the time we ate.

Although it was night and they made us keep the shutters down, I was excited (and strangely nervous about flying to somewhere so far from home) and kept peeking out. On the way to the airport we'd done some calculations and figured out what time sunrise would be, deciding on 2am. I looked out to see a red glow on the horizon at around three, possibly somewhere over Russia. A couple of hours later we passed the Himalayas, a distant white outline jutting up over misty foothills. We both got some sleep but not enough and were glad it was almost the end of the day again by the time we got to Bangkok.

My first impression of Thailand was how smiley and welcoming the people were. A few smiles went a long way to keeping our moods up after the long flight and we soon found ourselves stamped into the country, exiting the airport into a wall of heat and humidity and then swiftly into an air conditioned meter taxi whose driver seemed to have made it his mission to exclaim "Happy birthday King!" approximately every five minutes that day. The King's birthday is a big deal in Thailand - unfortunately we arrived too late and too tired to really appreciate it, but it had clearly created a cheery atmosphere.

He had also made it his mission to pin an example of a bank note from every country in the world onto the ceiling of his taxi, and was delighted when we helped him out with a Slovakian note that had been in Dgym's wallet for the past five years. Passing and greeting another taxi at a set of traffic lights, I noticed a similar collection on the other driver's ceiling - maybe it's a competition.

After checking into the hotel, we found ourselves a cheap street cafe and sat down for a pad thai and chicken with cashew nuts. The sleep we got wasn't the sleep we were craving - I slept restlessly for three hours, woke up for three more and then slept heavily and peacefully for another three, which weren't enough, and Dgym didn't fare much better. We spent a few days in Bangkok, catching up on sleep, getting used to the heat and the squiggly letters and seeing some sights. Bangkok's a huge city and it's relatively hard getting around. It feels as big as London, and indeed has a similar population, but imagine London with only a couple of tube lines, none of which go into the central bits, and a bus system you can't understand. We walked a lot and ended up with quite sore feet. We took taxis and tuk tuks (three wheeled motorbike taxis) which were nice and cheap, despite the tuk tuk driver quoting us 30 baht (60p) at the start of the journey but demanding 70 when we got out.

One day we took the Skytrain as far to the centre it would go, the National Stadium, and walked for about an hour along a busy fumey road to reach the old town centre. We could taste the fumes, and felt quite ill by the time we got there. We visited Khao San Rd which is backpacker central but I had also read you could get barbequed bugs there, unfortunately we didn't find any. We found a weird park which appeared to be themed around some kind of Thai story - giant hearts, bunnies, a boat, and a tree decorated with lights and gold foil hearts beneath which school children lined up to have their photo taken. So did we. 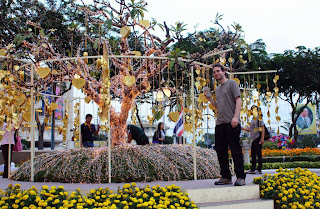 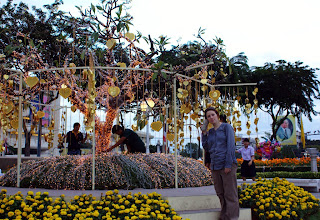 We spent an afternoon visiting the Grand Palace which consists of several buildings, mostly made of sparkly shiny stuff. Dgym commented that it was pretty, but the kind of pretty that an eight year old might glue together with sequins and gold foil. It was super-blingy and very pretty, a good way to spend an afternoon.

We ate some very tasty food, and were pleasantly surprised to find UK Thai restaurants are pretty authentic (well, in taste and content, not pricing). However, Thai puddings are a very pleasant surprise and we feel slightly sad that so many UK Thai restaurants resort to a lame generic ice cream menu rather than serving authentic desserts. Coconut milk soups with water chestnut, taro (which appears to be a kind of squishy red bean based thing), mango with sticky coconut rice... delicious.

We left Bangkok on Thursday and headed out on the train to Kanchanaburi. More on that soon...
Posted by Hel at 3:31 am