Sunday April 27th - Getting there

The journey started at Horsley station, with me plus half my body weight in bike and luggage on one side of the tracks, four minutes until my train was due, and my passage rudely interrupted by one of those pesky iron footbridges that is the scourge of train-travelling cyclists UK-wide. Had this been the end rather than the beginning of a tour and I was feeling a little fitter, I might just have been able to heave everything up one side and restrain it from crashing down the other, but I decided not to risk breaking my back.

I left the bike and handlebar bag on one side and raced (well, it felt like racing but probably looked more like waddling) over the bridge with all four panniers, then returned for the rest while several bystanders gazed on with amusement. It's not easy even getting an unladen bike over those things, and I only just made the train. 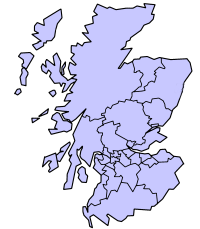 I was headed for the western islands of Scotland, a journey I'd had in mind ever since I'd got back from France, seen the vast empty mountainous landscapes of the Highlands on the telly a few times and imagined rolling up and down those long lonely roads on my bike.

I reached London and crossed from Waterloo to Euston without incident, apart from nearly wrenching my left hip out of its socket while stopped at traffic lights when my body forgot that a fully loaded touring bike is quite hard to hold upright.

The lights were off in the bike compartment and I spent several minutes struggling with a torch between my teeth while trying hang the bike up on the accursed hooks that train companies seem so keen on (those who care about their wheels slightly less so). Fortunately there was another cyclist to help, Harold, who was heading up the western and northern coasts over 5 days, riding 70 miles a day and staying in pre-booked B&Bs. We sat down in the lounge car later on, compared routes and chatted about cycling with a lady whose name I never found out, not a cyclist but a keen hill-walker. She worked in Scotland for the John Muir Trust, a charity which is not very well known but owns and protects various wild land in Scotland, including the peak of Ben Nevis which apparently cost about £400K a few years ago. She reassured me that, despite the miserable weather forecast over the next few days, I was bound to end up with at least some good weather over the next three weeks.

Being short on funds, I had booked a reclining seat on the sleeper but there was no power in the carriage I was supposed to be in so it was replaced with a berth carriage and I was fortunate enough to get a free bed for the night. Best of all, this included a toiletry kit with an awesome little collapsible toothbrush. I didn't sleep particularly well, mainly through excitement (about Scotland, not the toothbrush). Scotland isn't technically a different country but it has its own identity and is quite distinct in a lot of ways and I was really excited about seeing it for the first time. Every couple of hours, or every time the train stopped, I'd get up and peek through the window to see what station we'd stopped at, are we in Scotland yet, is it light yet... It was light, and turning out to be a grey and drizzly day, by the time we reached Inverness. Thankfully, Inverness station is easy to get around with a bike and has no nasty footbridges. I stopped off at the cash machine to get some funny money and then boarded the train to Kyle of Lochalsh. A little old man seated by the bike compartment, started talking to me in a strong regional accent, and I had very little idea of what he was actually saying. I had joked before I left, that I'd probably have a harder time understanding the locals in Scotland than I did in France, but this did make me a bit worried that it might actually be true.

Harold and I chatted some more on the train, then he got out at some intermediate station whose name I forget, to begin his journey north. I hope he enjoyed it...

The sun came out as we arrived in Kyle of Lochalsh, and the cycling began.
Posted by Hel at 6:44 pm