A cup of Trangia Tea

The Trangia 27-1 UL stove arrived last Wednesday in a little brown parcel and it was all very exciting. Unfortunately in all the excitement I had neglected to get excited enough to actually buy any fuel for it, so wasn't able to test it straight away and had to content myself with merely unpacking it, working out what was what, and gazing admiringly at how neatly all the bits and pieces nested together. 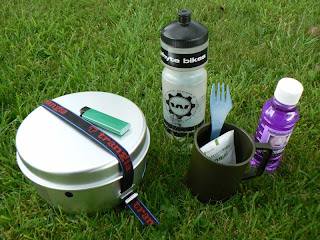 On Thursday I picked up a good supply of pretty purple juice from the hardware shop and on Friday, a rather bleak and drizzly looking day (hey, this is the summer of grey miserable days, don't you know?), I put on my raincoat, armed myself with one Trangia stove + accessories, one plastic camping mug, one Spork (for stirring), one teabag, a small bottle of meths, a bottle of water, a cigarette lighter and set off into the deepest darkest depths of The Garden to boil up a cup of Trangia Tea.

The Trangia comes in several parts: 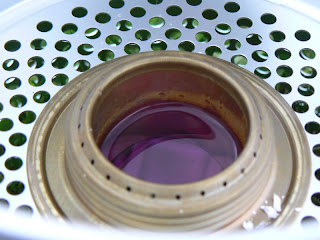 I poured a small amount of meths into the burner and added a little water. You're supposed to add 10-15% water to the fuel to prevent sooting - it probably would have been a good idea to have something to measure out the proportions.

Lighting the stove was a bit tricky. At the risk of sounding a bit stupid, I spent a considerable amount of time attempting to light the little holes, like you'd do on a gas stove. Ten minutes later I had a sore thumb and an unlit stove. I tried using a bit of paper to transfer the flame but that didn't have much effect either. The instructions on the packaging didn't make it clear exactly how to light the stove, and after much frustration I gave up, headed indoors and searched the internet for more information. 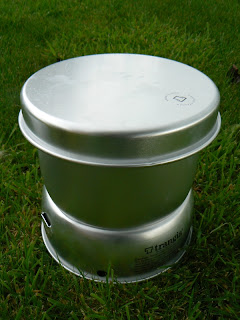 That was when I came across a delightful little page on How to use a Trangia Camping Stove which informed me that, contrary to my instincts, I should just be chucking a lighted match into the little purple puddle of fuel. My cup of tea was saved! I didn't have any matches so had to use the lighted bits of paper, and a couple of minutes later my little stove was roaring away. I measured out a cupful of water into one of the saucepans, put it on to boil and covered it up with the frying pan / lid.

It took about 3-4 minutes to boil - not the fastest stove in the world but its stability does allow multi-tasking, so I could have made a start on putting up the tent while the water was boiling. At this point, most of the system was quite hot. The upper windshield, pan and lid were all too hot to touch and I needed to use the handle with them (the handle stays off until you need it). The lower windshield was cooler, but with longer cooking it too might have been too hot to touch. 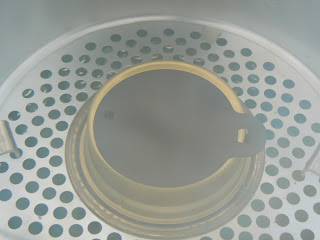 I removed the lid, took the pan off the flame and dropped the closed simmer ring onto the burner - a tricky task as everything was so hot - and left the burner to cool. The cap shouldn't be screwed back onto the burner until it has cooled, otherwise the rubber seal on the cap will be damaged and you'll end up leaking meths everywhere. 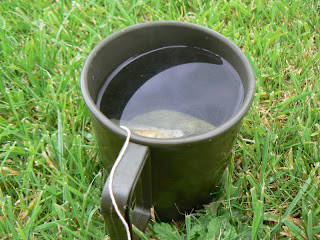 I poured the water into the plastic camping mug and left my cuppa to brew for a few minutes. 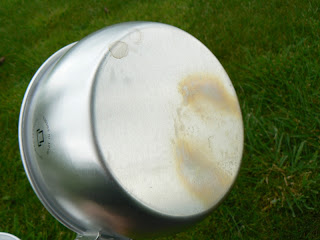 Examining the bottom of the pan revealed no sooting whatsoever (sooting is frequently reported by Trangia users who don't read the instructions and burn neat meths), just a little discolouration from the heat. Jolly good. 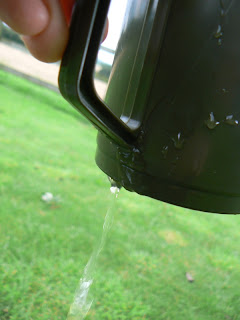 Disaster struck when I noticed an odd phenomenon - the cup was virtually empty but I hadn't drunk anything from it. The cheapo plastic mug I'd picked up from a nearby camping shop, while nice and light, was also split down the handle and the lawn had drunk most of my lovely cuppa. Noooo....

Useful things to consider when using a Trangia.

So the stove works great but if anybody feels like donating one of those nice titanium camping mugs, do get in touch.

One minor tip, after cooking the trangia should cool to room temp in about 2-3 minutes. Metal cools fast. So no need to wait half an hour to refill.

They are great stoves.

Thanks! Yes, they are great stoves. Haven't used it in a while, might have to get it out some time for a cuppa :)