The trike has arrived

Many, many thanks to those wonderfull people at ICE for getting my trike to me ahead of schedule. It arrived yesterday afternoon in box full to the brim with well packed parts and an instruction manual. For those that are purely interested in the locomotive aspect of cycling, ICE trikes are available through several dealers who will sell you a fully assembled machine, costing a bit more but also getting you on the road many hours sooner. I didn't want to go that route because cycle maintenance is a necessity on a long tour, and what better way to get to know your cycle than to assemble it yourself? Besides which I like cycle maintenance, things tend to be simple enough that I can understand them after a bit of prodding and twisting, and it is really rewarding to ride the results.

For the impatient, I'll start by saying that this is a lovely machine. We got up early this morning (for us) and went up the local big hill, which conveniently has a good place for breakfast at the top. Going along the flats was very comfortable, the suspension does a great job where the road layers didn't, and junctions are much more pleasant when you don't have to de-clip and can just sit there relaxed but perfectly ready to go when the opportunity arises. The uphill was still hard work as ever, but again the trike advantage of stability at low (and zero) speeds really does help. All my effort went into getting me up the hill, rather than having to worry about keeping the bike upright, and although Hel got to the top first, I wasn't far behind at all.

Downhill. Up until then riding the trike had put a very very big grin on my face, but when we got to the bottom of the hill and Hel asked me how that was I just burst out laughing. It is only at high speeds you can really appreciate how supurb the handling is, the stability and responsiveness never faltered. Apparently the road surface was bad enough to blur Hel's vision at 30mph (on her unsuspended tourer) but I didn't notice anything and was comfortably going a bit faster. Going fast down a hill on a very comfortable, very stable machine which you have a lot of confidence in is actually mildly pleasant. I am tempted to stop writing now and do it again.

The assembly took a while longer than expected, but this was mainly due to poor location, poor lighting, and impending rain. For anyone opting to build their own Trice the supplied instructions are very good, and hopefully these photographs might give you an overview of what is involved. 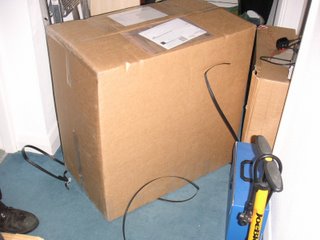 With a lot of components stuffed in. 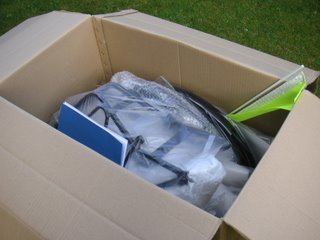 The starting point - a lovely frame. 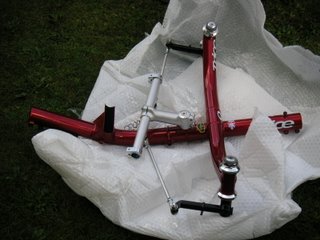 The wheels are also pre-assembled. 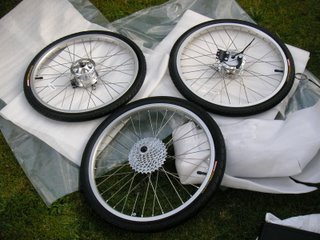 Steps 1 and 2 complete, the handle bars just slot in and tighten up, and the same with the wheels, a nice easy start. 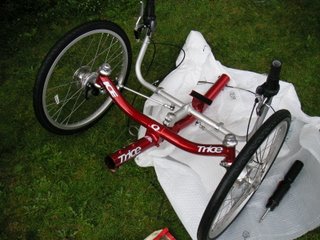 The brakes connected really easily, and the back is simple enough too. Nothing hard yet and it is starting to look like something. 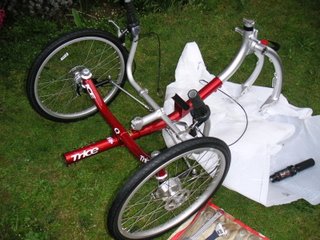 The third wheel, it's a trike! 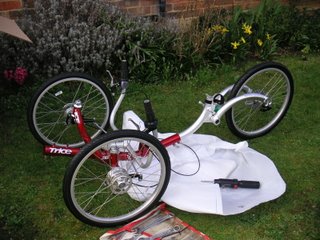 The seat took a little while with all its straps, but I seem happy enough. 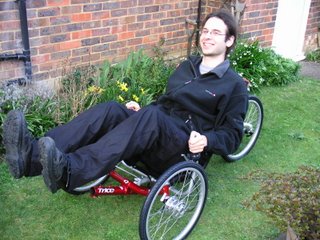 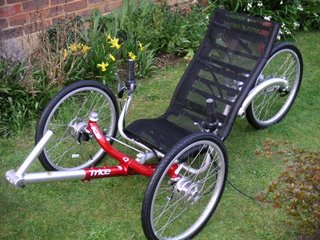 The rain has come. Relocate the trike, and add some pedals. 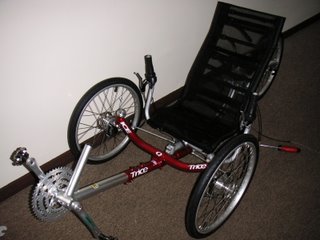 The front and back derailleurs are attached, a little alignment is needed for the front. 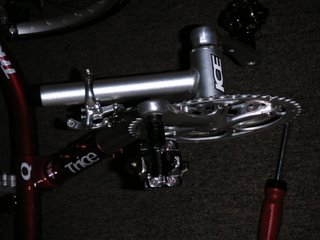 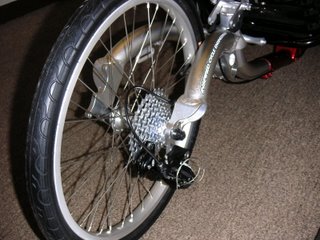 Tubes for chains. At first glance this was considerably harder than previous tasks, but with everything laid out as per instructions it soon made sense. 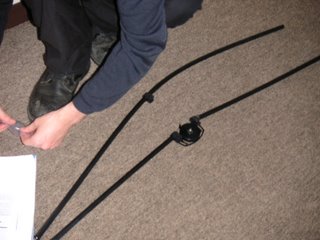 Tubes and chains fitted. It is greasy and quite fiddly working with the chain and getting it to the right length. All the basics are done, time for a test ride, but it is dark outside and none of the pictures came out. 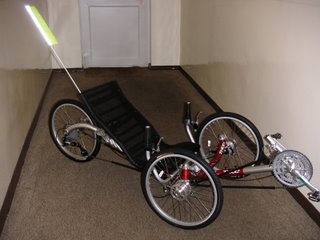 The next morning, with mudguards, mirror, rack, side pods etc. 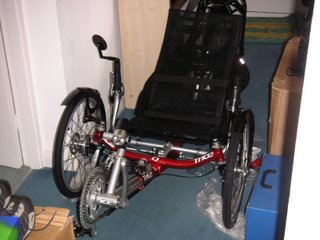 Post-ride update now that I have had a chance to fully appreciate the trike:

As well as thanking ICE for the early shipment, I also want to thank them for their pre-sale advice on which model would be right for me, and for designing such a great machine and building it to such a high standard.

I was a little anxious about ordering such an expensive piece of unusual kit without trying it (or anything like it) first. The trice has soundly exceeded my expectations - it's not expensive, it's valuable.
Posted by dgym at 6:21 pm

Looks pretty cool! Does the camber of the road give you any problems? The only time I've tried a three-wheeled vehicle I kept getting an unnerving sensation of sliding sideways.

I didn't really notice being at a funny angle on some roads until Hel pointed it out. Maybe it's because the steering is so accurate and responsive I was instantly put at ease, or maybe my balance is very bad.

Now I do notice tilting this way and that, especially on bumpy roads with tight corners, and it all adds to the fun. I'm definitely not thinking about bumps and balancing like I would on a bike, instead I treat it more like a human powered go kart, and am having a lot more fun.

Was the three-wheeled vehicle very close to the ground? I think an upright trike would be more unnerving because it is that much closer to the normal bike experience.

Heh. It was an ice-cream vending bicycle I had for a very, very, very brief summer job; so I was far off the ground (though at least visible). I expect it's a lot better on a reclining trike.

I hope you both have offset cranks .

Why can't a subscribe to an RSS feed of your blog? Does Blogger not offer this or am i just being dumb?

That thing is just crazy-town. I totally want to try riding one of those things once. I wonder if our local bike shop would have one I could test-ride. Is it more difficult than riding an upright bike? I would like to know more about the whole "riding experience."

Hi Pete - Blogger does an Atom feed by default, and we've also created an RSS feed from Feedburner, if you'd prefer that.

Excellent, thank you! I've added you to my netvibes homepage so I'll know the moment you update the blog! (It's a lot more interesting than rachael's , just kidding rachael ;-))

No, it's not harder than riding an upright, it's much much easier. While you get on and get your hands and feet into position it just sits there nice and still (its got parking brakes - the front brakes have a locking mechanism). When you are all set you just release the front brakes and start pedaling - no balancing required, just effort with your legs and steering and brakes with your hands. Its as easy as the pedal powered go-kart I had when I was 6.

Tight manoeuvres can certainly be harder than on an upright. The turning circle is fine for roads, but going back on yourself in a country lane is probably going to take a 3 point turn at least. Thankfully reversing is quite simple, just un-clip one foot and use it to push directly against the ground.

This doesn't seem to be a sedate stroll-though-the-park type of machine -- although it can cruise perfectly well, and very very comfortably, it definitely wants to have more fun than that. Going straight and flat for too long is a waste of its excellent steering and handling.

Try and take one out on a test ride if you can, it would be well worth it.